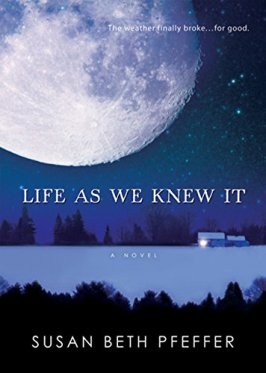 We’ve all read our fair share of dystopian novels, be it Hunger Games or Divergent. Dystopian is a pretty popular young adult genre these days (and we can talk about why that is some other time). One of the dystopian books I remember reading way back in the ancient days of the mid-2000’s is Life as We Knew It by Susan Beth Pfeffer.

I basically forgot it existed, until I saw the series box set at a friend’s house. He was nice enough to let me borrow the set, because I decided I wanted to re-read my introduction to dystopia.

Miranda: Miranda is only 16 and hasn’t learned how to drive yet. She hasn’t dated anyone, and she swims, plays volleyball, and used to figure skate.

Miranda’s mom: Miranda’s mom is a writer and works from home. She plans ahead for everything, and is pretty much the only reason that Miranda and her brothers survive.

Matt: Miranda’s older brother, who went off to college a few years ago. When the world starts to end, he rushes home as soon as he can. He is strong, smart, and Miranda’s hero.

Jonny: Jonny is the youngest in the family, and the one everyone is betting on. He loves (and I mean loves) baseball, and is only thirteen years old.

Mrs. Nesbitt: Their neighbor, who also happened to babysit Miranda’s mom and grandma when they were young. She lost her husband a few years ago, but everyone considers her family.

Horton: The family cat seemed pretty important to mention. He serves a very important role in how the family feels in this time of crisis.

Sammi and Megan: Miranda’s best friends. Megan goes to church and tries to convert her friends every chance she gets, and Sammi is a serial dater.

Everyone in America is excited when the news announces that a meteor is going to hit the moon, and everyone should be able to see it with binoculars. For some reason, no one thinks this is cause for any kind of concern, until the collision pushes the moon just enough closer to Earth to wreak havoc, but not enough to crash.

Natural disasters pop up all around the world, from tsunamis to volcanic eruptions to earthquakes. Within days, the number of deaths in America alone is up in the hundreds of thousands.

Miranda’s family stockpiles months’ worth of food and supplies and disappears into their home. They stay there as most of the people around them leave their town in Pennsylvania to go south, where life is rumored to be better.

When volcanic eruptions send ash into the sky and block out the sun, Pennsylvania grows cold. When the snow comes, Miranda’s family is condemned to stay inside with no electricity, running water, or heat, and a food supply that is quickly running low.

As far as dystopian novels go, this one is enjoyable. A solid 3.5 out of 5.

I would have rated it higher, but Miranda seems a tad immature. I get it. She’s sixteen and has a stable home life. But she’s known her share of heartache when one of her friends, Becky, died a year earlier. A reader would assume that a sixteen-year-old who lost a friend and is looking forward to college would be a little more mature.

I can see her character growth, though. I can see her trying to be more self-aware and caring. And although it isn’t likely that the moon will be shoved closer to Earth and newscasters will grossly over-inflate the problem (the news isn’t very accurately written, but I can give that a pass), I think this novel paints a realistic picture of the effects that disaster can have on family.

Go check out my last review, which was on The Night Visitors. You can also visit my bookshelf, where you can see all the fiction and non-fiction books I currently own and have decided to keep.

Thank you so much for reading, and I’ll see you next week!

One thought on “Life as We Knew It”