Welcome back, my lovely people!

Tonight, I have an interesting read for you. I’ve gone out of my comfort zone a few times in the past few months (96 Words for Love, On the Come Up) but this time, I went far out. Instead of reading a young adult novel, I decided to check out a book called The Night Visitors by Carol Goodman.

Read on to see why it caught my eye. 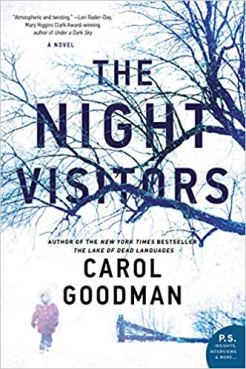 Alice: Alice is a young woman running from an abusive relationship. She is very careful about everything she does, because everything she has done before (and I mean everything) has had consequences. She’s a product of a flawed foster and justice system.

Oren: Oren is a ten-year-old boy who is obsessed with Star Wars and just as weary as Alice. He is running from the same abusive household as Alice, and always seems to know more than he should.

Mattie: A well-meaning old social worker near the town of Delphi, New York. She lives on her own in the middle of nowhere, in the same house her family (mother, father, brother) died thirty-five years earlier.

Caleb: Caleb is Mattie’s brother who died. He plays a very important role in the choices Mattie makes throughout the novel. He was also ten when he died, and also obsessed with Star Wars.

Doreen: Mattie’s friend from the Sanctuary, the social work office in Delphi. Doreen gives Mattie a lot of advice, and taught her everything she knows about social work.

Atefeh: Though Atefeh only appears in a few scenes, she plays a vital role in what happens to Alice, Oren, and Mattie. She is from the middle east and wears a hijab, which rubs a few rednecks in town the wrong way.

Jared: The redneck. He harassed Atefeh while she was working, and appears again (though I won’t say in what context. We avoid spoilers here).

Frank: Frank is the chief of police and Mattie’s old flame. Mattie doesn’t exactly trust him, but mostly because she knows he is very by-the-book, and she isn’t.

Mattie’s parents: We only meed Mattie’s parents in flashbacks, but she thinks of them and what they would say to her almost constantly. Mattie still hasn’t touched her dad’s old office, and it sits in her house, locked.

Sister Martine: Sister Martine leads St. Alban’s, a shelter for women and children. She isn’t your mother’s type of nun.

Davis: Oren’s father. He is the one Alice and Oren are running from.

Alice and Oren find themselves on a bus headed to upstate New York after a particularly violent fight with Davis. They somehow find their way to Delphi, New York, in the middle of the night, where Mattie, an old spinster from the edge of town, picks them up and takes them in.

Alice and Mattie both have their secrets, and they both have their enemies. They are suspicious of each other because of the way their pasts have shaped them, but they work together to keep Oren safe.

When Alice and Oren refuse to stay at St. Albans (Davis could find them, Alice says), Mattie makes plans with Sister Martine to get them to a place that Davis would never be able to track them down. They have to stay another night in Delphi, because a blizzard is blowing in, and the buses are suspended.

Through news clippings, hushed conversations, and careful observation, Alice and Mattie start to learn more about each others’ pasts, all while Oren tries to keep the peace. All the while, something weird is going on in the house. Oren knows things he should have no way of knowing, and the untouched rooms of long-dead relatives have everyone looking over their shoulders.

I’ll be honest, I’m skeptical about thriller novels. A few years ago, I had a horror/thriller/suspense kick, and all the novels I picked up weren’t interesting, or they were too slow-paced, or they weren’t as scary or suspenseful as the ratings made them out to be.

So, maybe you’ll believe me when I tell you that The Night Visitors was just as suspenseful as I hoped it would be. Not once did I count how many pages I had left (something that I’ve been guilty of doing). My jaw actually dropped a couple times. There were a few gasps, and a few hand-to-mouth moments. I flew through about 120 pages in a matter of hours.

Despite my love for feel-good young adult novels and books about queer characters (of whom this novel had exactly none), I loved it. This novel will find its place on my bookshelf.

Speaking of my bookshelf, why don’t you check it out? There, you can find all the fiction and non-fiction books that I’ve decided to keep over the years.

Also, take a look at my last post, Still Life with Tornado.

Have a good week, and read a good book!

One thought on “The Night Visitors”