Netflix just released the show Tidying Up with Marie Kondo. And I watched it, mostly because I wanted something to watch. And I put off reading the book, because I have this thing about cleaning.

I’ve moved a number of times, and every time I pack and unpack, I end up getting rid of heaps of stuff. I also go through my things (not extensively) every once in a while when I’m tired of dealing with something (case in point: I realized I didn’t want one of my pillows anymore, and that sent me on a garbage hunt).

My biggest qualm with cleaning, and the main reason that I rarely do: I’ll have to do it again. What’s the point of cleaning if things just get dirty again? But Marie Kondo claims that I’ll never have to tidy again. 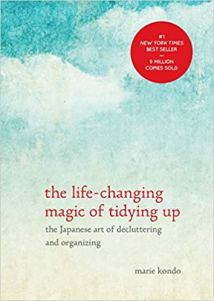 Marie Kondo’s show inspired me, so I bought The Life-Changing Magic of Tidying Up, read it, and set to work.

Marie Kondo claims that once we follow her method, our space will remain tidy. We’ll want to keep it tidy. Kondo says in her book that she has never had a repeat consultation, and she visits some of her students months after they “graduate” her tidying course, and their homes are still tidy. She also claims that the most tidying she ever does now is an hour twice a year. This was my main reason for actually tidying: apparently, I will never have to clean again.

I haven’t had a tidy space for long enough to be able to evaluate her claim, but my space is tidy at the moment.

Kondo says to start with clothes. I got rid of three garbage bags and one storage bin of clothes, and I still have plenty to wear. I had no idea I had so many clothes, let alone clothes that I didn’t like and never wore.

Books next, and I got rid of quite a few. I did not get rid of Kondo’s book, even though she said that she wouldn’t mind if we did (I plan to lend it to my grandparents. They expressed interest).

I saved more of my papers than I thought I would, or than Kondo recommends. I still have a fan binder for them.

Miscellaneous items, or komono, took a while. My room was covered in piles of garbage, things I never used, and boxes filled with recycling.

The whole point is to hold every individual object in your hand and decide if it sparks joy. If it does, keep it. If it doesn’t, discard it. I discarded way more than I anticipated, and I put all my photos in photo albums. Once I have more shelf space, I’ll put the albums up. They’re in storage at the moment.

So, I downsized my storage from four bins, a large box, two suitcases, and a small box to one bin and the same small box.

I sincerely hope that I can keep my space tidy, and I also hope that I don’t find that I regret getting rid of anything. Who’s to say whether something I discarded or donated will be missed in the future? Who’s to say whether my dad will want a copy of that one specific photo of my dog as a puppy, or whether my sister will ask for that ugly sweater she saw me wear that one time?

But, I’m choosing to trust Marie Kondo, and I’m going to work on keeping my space tidy and build up good habits.