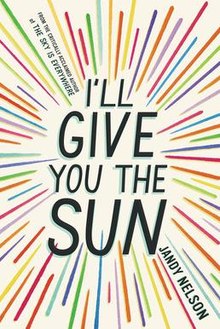 Welcome back, lovely people.
I’m very excited about this week’s novel. It’s called I’ll Give You the Sun by Jandy Nelson. If you want a book that will appeal to your artistic, superstitious, romantic, and  emotional sides, this is the novel for you.
Characters
Noah and Jude: I’ve put these two together because they are twins, and their personalities are opposite but switched at some point between the ages of 14 and 16. Jude was the popular party girl and Noah was quiet and artistic. After their mother died, they changed. A lot. They’re also both dealing with their own love stories and their prevailing grief. Also, important note: Noah is gay and in love with a boy, and Jude is being haunted by the ghosts of her mother and grandmother.
Guillermo: Guillermo is a famous stone sculptor who agrees to teach Jude the art of stone sculpting, even though he hasn’t taught in two years (you’ll figure out the reason why near the end). What you need to know now is that he is heartbroken and emotionally not in a good place.
Oscar: Oscar is an nude model from England. Hes also a recovering addict and rides a motorcycle and wears a leather jacket and is into photography and has a gnarly scar on his face and along heterochromia (two different color eyes) and is also a womanizer. He has a lot going on.
Dianna: Noah and Jude’s mom. She is very eccentric, artistic, and loving. However, she accidentally plays favorites enough to drive her children apart.
Dad: strong, businesslike, and also unintentionally plays favorites.
Grandma Sweetwine: She’s a ghost and believes in a lot of hogwash.
Brian: this is the boy Noah is in love with. He loves space and also baseball. He drives much of Noah’s story line.
The Hornets, Fry, and Zephyr: A bunch of popular bullies. Every young adult novel has them.
Plot
The story is told from two points of view in two different time periods. Noah tells the story when he and his sister were 11-14. This part of the story shows the events leading up to their mom’s death, their application processes to CSA (California School of the Arts, an artistic and highly selective high school), and how he and Jude grew apart. Here we also meet Brian and see how they fall in love over a summer of early mornings and late nights wandering the woods. He’s accepted that he’s gay, but he is in no way out to anyone. At. All.
After they turn 16, Jude tells her side of the story. Here, we discover that she made it into CSA but Noah did not, and she feels unspeakably guilty about a few things we don’t learn about until later in the book. She and Noah barely talk, she is falling for Oscar, and her mother’s ghost haunts her and breaks all of her art at school. She seeks out Guillermo Garcia to teach her stone sculpting, because she believes that he mother can’t break stone.
Both of them feel guilty about a number of transgressions, and they both find out many secrets about themselves, each other, and the people around them.
Two love stories, two takes on grief, two revolutionary children, one novel.
Review
I. Love. This. Book.
Jandy Nelson does an unbelievable job writing these two stories. It is so easy to get lost in the imagery and the metaphors in this novel. I’ve read it twice, and I gasped and cried and smiled like an idiot both times (word to the wise: don’t read I’ll Give You the Sun in public unless you’re okay with looking just a little crazy).
The characters are so strong and strange, but it’s also easy to find ourselves in them. I saw myself in Jude’s desire to disappear, in Guillermo’s grief, in Noah’s escapism, in Brian’s passion… I can also see myself in a story of fantastical youth, tragedy, and the attempt to overcome trauma. A+ novel.
Seriously. 5 out of 5. No question.
Do yourself a favor and read this one.