Welcome back, my lovely people!

Second on our ever-expanding list of books to read is 96 Words for Love by Ava Dash and Rachel Roy. This is a new release, so this past week is the first time I’ve read it.

Let’s get into it! 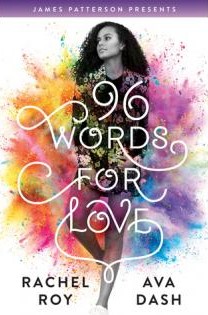 Raya: Raya is a half-Indian and half-black girl who just graduated high school in California and is uncertain about what she wants to do next. When her grandmother dies and sends her to an ashram in India, Raya uses it as a journey of self-discovery. She also wears an almost ridiculous number of “witty” graphic tees. She’s nice enough, but I have some issues with the way she acts that I’ll touch on later.

Daadee: Daadee is Raya’s grandmother. We never meet her in the traditional sense, but she drives the plot, and we learn enough about her life and beliefs that it feels like we know her personally.

Anandi: Raya’s cousin who lives in India. Anandi journeys to the ashram with Raya. Her parents have planned her whole life, but she has a passion for music, especially Nick Jonas’s early years.

Kiran: Kiran is actually described at one point as “the bad boy of the ashram.” Seriously. Apparently, this is how to describe a guy who refuses to participate in any ashram activities or follow any rules. They aren’t hard rules to follow, either. He is, unsurprisingly, the love interest, though I don’t see why Raya likes him.

Pihu: Pihu is an eleven-year-old at a local impoverished school. She wants to be a teacher and inspires Raya with her love of learning and bravery in the face of danger. She plays a very important role in illustrating the importance of Raya’s visit to India.

Pilot McRae: He is both gay and black, which is why it’s a little surprising that he is a former Disney Channel star who somehow ended up at an Indian ashram.

Devin: A British woman, Devin is pretty much the only straight white person we get to know. She uses the excuse of brutal honesty to say and do whatever she wants, including making racist comments, stalking another ashram visitor, and touching Raya’s hair without permission.

Guru Baba, Raya’s parents, and Lexi: These characters are important, but they mostly exist to drive the plot. Guru Baba provides Raya with about four pages of guidance, Raya’s parents pay for her trip to India, and Lexi is Raya’s lesbian best friend who triggers Raya’s existential crisis.

Raya originally plans to go to UCLA to study English, but Lexi inadvertently makes her doubt her chosen academic path. This leads Raya down a path of self-doubt and worry about her future. Around the same time, Daadee dies and tells her granddaughters, Raya and Anandi, that she left something for them at her favorite ashram in the Himalayan foothills.

Raya and Anandi travel to this ashram and throw themselves into ashram life for a month, while also searching for the treasure Daadee left behind. They both use the time to discover what is important to them and where they want their lives to lead.

Also, Raya meets Kiran, and they end up in a wild and lustful relationship that goes against the ashram’s chastity rule, but they are destined to be separated because of their life paths.

Also also (yes, two alsos), Raya volunteers at a local school, teaching Pihu and other kids how to read and do math. Something with the school children happens in about the last thirty pages, so I won’t spoil it.

All this considered, there are about four plots happening at once.

I bought the $17.99 hardcover because it’s a fairly new book. According to the copyright page, it was first published last month, which explains why it was on the “new releases” table at Barnes and Noble.

It took me about seven days of forcing myself to sit down and read. For me, that’s a while. I also think that this is one of those books that I’m going to try to resell. It’s not going to end up staying on my bookshelf of carefully curated novels.

It took me a while to read 300 pages of multiple loosely connected plots. While I appreciate the diversity of the story, and the main character who was both Indian and black, it felt to me like the first part of the novel dragged on much longer than necessary, and the second part moved too quickly. Raya had so much going on, and I know that it often feels like that in life, but it gets confusing to navigate in a single novel. Plus, one of the conflicts (the climax conflict, no less) appears within thirty pages of the end of the novel, and feels like it was thrown in because they needed an excuse to move Raya somewhere else.

Raya also tends to act fairly juvenile while thinking that she is much more mature than she is. She finds faults in others but doesn’t work on her own. She seems to believe that the world revolves around her, and while her time at the ashram taught her some things, those teaching moments happened late in the novel and all at once.

Like I said, I appreciate the diversity and the setting, but, in my opinion, there were one or two too many plot lines for one book. For these reasons, I have to give it 3 diamonds out of 5.